Let’s get you singing and dancing with these Barry White Greatest Hits. Barry White as you know had an incredible voice and was a particular favourite of the ladies. He was born Barry Eugene Carter in Galveston Texas on the 12th September 1944. He was of course better known by his stage name Barry White. He was a singer-songwriter, musician, record producer and composer. He sadly passed away on the 4th of July 2003. His music however will go on forever. 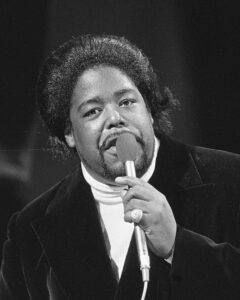 Some more information on Barry White. In his younger years he was running with gangs and the church was his salvation as he was encouraged to play the organ and arrange for the choir.

In 1960 aged 16 he joined an R&B group called the Uptights. In 1961, he studied production under Jack Stern at Rampart Records. He made his singing debut as Lee Barry on the Downey Label.

He was married to Mary by now and was struggling to keep his wife and family from the breadline.

He played keyboards for Bob and Earl on Harlem Shuffle.

He became head of A&R (artists and repertoire) at Mustang Bromco Records.

When Mustang Bronco Records folded in 1968 he spent his time developing Love Unlimited. Walking In The Rain With The One I Love written by Bob Reef of Bob and Earl was their first chart success in 1972 reaching number 14 in the UK and the US.

Love Unlimited were formed in 1969, they included Barry White’s future wife Glodean James. The group also included her sister, Linda James and the other member of the group was Diane Taylor. They met Barry White when they were doing session work.

Love Unlimited only had one other hit in the UK with It May Be Winter Outside (But In My Heart It;s Spring) which got to number 11 in the UK in 1973.

It was inevitable that Barry White would be persuaded to venture onto vinyl himself which he did in 1973 with I’m Gonna Love You Just A Little Bit More Baby which reached number 23 in the UK and number 3 in the US.

He followed this up the following year 1974 with 3 top 20 singles in the UK. Never Never Gonna Give You Up got to number 14, Can’t Get Enough Of Your Love Babe Made it to number 8 and he had a chart topper with You’re My First, My Last, My Everything. This was to be Barry White’s only number 1 in the UK.

A familiar pattern is emerging here as he had another 3 top 20 hits in 1976. You See The Trouble With Me got to number 2,

Baby, We Better Try And Get It Together made number 15 and finally in 1976 Don’t Make Me Wait Too Long managed to get to number 17.

He only had 2 further minor hits in 1977 with I’m Qualified To Satisfy You at 37 and It’s Ecstasy When You Lay Next To Me which made it to number 40. He had his final 70s chart success in the UK with the Billy Joel song Just The Way You Are in 1978 which peaked at number 12.

I will name the song, the year released, and the chart position reached here in the UK. I will list top 40 hits only. 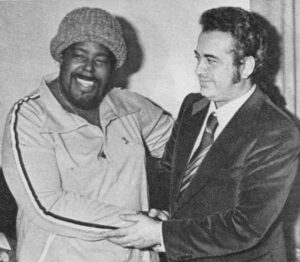 I will name the song, the year released, and the chart position reached here in the UK. I will list top 40 hits only.

That’s it for this look at the greatest hits of Barry White. I hope you got the info you were looking for. Make sure you call back as I build up this site. Please leave a comment below and let me know your favourite Barry White song.

You may have seen him in concert let me know when and where the concert was held. It would be interesting to know. I never saw him in concert, though I did see a so called tribute act in Benidorm once when I was on holiday. He didn’t have the voice to do Barry White’s songs justice but he was great at singing Purple Rain by Prince.

If you have a spare minute could you pop over to facebook and like my facebook page please. Leave a comment or add a video from the 70s and I will send you a link to a free gift.

Thanks for visiting today and as I said earlier make sure you call back again.