In today’s post I cover Hot Chocolate songs. They had their first hit single in 1970 and were quite prolific during the 70’s, singles wise.

Back in 1969 two friends Errol Brown and Tony Wilson started writing songs together. Wilson was already an established session musician as a singer and bass player. Errol Brown who was born in Jamaica but emigrated to England with his family as a child lived near Wilson.

Errol stated that he always had words and melodies in his head and his friend Wilson encouraged him to do something with it. They inevitably were drawn towards the Apple label, 1. because of the Beatles, and all that being associated with them could bring and 2. Apple were happy to help songwriters with financial support.

They were employed by Apple to write songs for other Apple artists. Two of the songs they wrote were Bet Yer Life I Do for Herman’s Hermits and a 1970 top 20 hit for Mary Hopkin’s called Think About Your Children.

It was only natural that they would want to become an act in their own right, rather than write demos for other artists. An Apple secretary is supposed to have jokingly suggested they should call themselves Hot Chocolate.

Apple, was in disarray by then.

The group were allowed to sign a contract with RAK Records and they stayed with the label throughout their career. They also acquired Mickey Most as their production manager, which was a good thing.

The pairing of Most and the band soon saw success within a few months, Love Is Life raced into the top 10 in August 1970, peaking at number 6. They did not want to rush out a follow up single and it was months later they released the much more up tempo You Could Have Been A Lady, complete with a horn section. It reached number 22 in the charts.

Again, there was no rush to bring out their next single and when their 3rd RAK single I Believe In Love was released in 1971 it was a year from their first. It entered the UK charts and reached number 8.

The group’s strategy was completely different from the traditional pop wisdom of following up a hit with another song straight away. They played no live dates and were yet to release an album, losing any goodwill they may have built with their singles success.

The group finally undertook their first UK dates in 1973. Harvey Hinsley (guitar), Patrick Olive (congas) and Larry Ferguson (keyboards) had all been around from the start. They added, on Hinsley’s suggestion, Tony Connor (drums) who was recruited from the band Audience.

There were two white artists in the line up, inter racial group’s were very rare in those days. Errol Brown sang and Tony Wilson played bass.

In 1974, they finally released their first album Cicero Park. The album was not received very well and the sales were disappointing, they had taken so long to release an album that public expectation had been built up to an unrealistic degree.

Their singles success continued though and in 1973 they released Brother Louie (see above) a different style to what they had produced to date. This song was about a mixed-race love affair. The song reached number 7 in the UK charts.

The song Brother Louie did make number 1 in the US, but surprisingly it was not Hot Chocolate who took it there it was a band called Stories. The royalties were great but the fact that someone else had reached the top in the US must have been disappointing for the band. They finally broke through in the US in 1974 with Emma.

In 1975 Hot Chocolate faced a major crisis when Tony Wilson left. He wanted to concentrate on independent songwriting and producing after clashes with Errol Brown.

It was thought this would affect the band as Wilson wrote all the melodies but Errol Brown was now in complete control. He was a showman and with his bald head was recognized as the leader of Hot Chocolate. Patrick Olive meanwhile abandoned the congas and took over on bass guitar.

Brown was not a prolific songwriter even though the hits continued. This persuaded the group to record two other writers songs. Russ Ballard’s You Win Again in 1977 gave the band their first UK number 1 and I’ll Put You Together Again taken from the musical Dear Anyone reached number 13.

The hits continued for Hot Chocolate see below, but album success still eluded them.

Hot Chocolate had 29 top 40 singles in the UK. Some of them were re-issues, but 29 is pretty prolific isn’t it?

I will list the song title, the year released and position reached in the charts in the UK and if applicable the US.

Hot Chocolate did not do too well in the charts with their studio albums, but their greatest hits fared a bit better.

I will list the album title, the year released and the position reached in the UK and if applicable the US 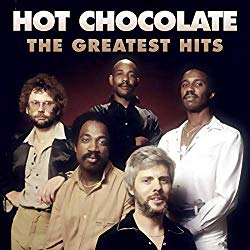 I hope that was enough information on Hot Chocolate for you. If you liked this post leave a comment below.