Welcome to my post on the best police songs. Police had 4 top 20 singles in the 1970’s here in the UK and 10 in the eighties. a very successful band indeed, add to that their hit albums and you can see what a top band they were.

Best Police Songs Of The 70’s

Police consisted of, Sting on lead vocals, bass guitar, he also wrote the songs. Andy Summers on guitar and Stewart Copeland on drums and percussion. Sting also had a great solo career too of course we will mention at the end of this post.

Before I go any further I have to get the old Police joke out of the way. A man goes for a job interview. The interviewer ask do you have a police record he says yes Walking On The Moon. Okay,okay I will get on with the music.

Here are the singles from the 70’s I have listed the songs name, year of release and position reached.

Let’s take a look at the track lists of some of their albums. 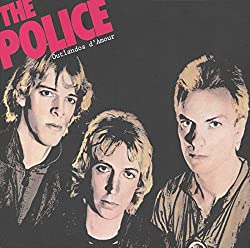 Here is the wikipedia write up of the album.

With a budget of £1,500 borrowed from Stewart Copeland’s brother Miles, the album was recorded at Surrey Sound in an intermittent fashion over six months, with the band jumping in whenever the studio had free time or another band’s sessions were cancelled Miles Copeland had promised to pay Surrey Sound £2,000 upon completion of the recording, but did not give them the full amount until much later.

Miles Copeland occasionally dropped into the studio during recordings, and reacted to what he heard from the group with vehement derision. However, upon hearing “Roxanne” he had the opposite reaction and took the recording to A&M Records the following day, where he persuaded them to release it as a one-off single. Though the single failed to chart, A&M agreed to give the band a second chance with “Can’t Stand Losing You.” At first, A&M proposed the band create an improved mix of the song, but after five attempts admitted that they could not improve upon the band’s mix and released the original mix for the single. When it became the band’s first hit, the record label quickly approved the release of the by-then finished album. Miles Copeland had originally wanted to name the album Police Brutality. However, after hearing “Roxanne” and then envisioning a more romantic image for the band, he proposed Outlandos d’Amour instead. This title was a loose French translation of “Outlaws of Love”, with the first word being a combination of the words “outlaws” and “commandos”, and “d’Amour” meaning “of love”.

The album, while at times incorporating reggae, pop and other elements of what would eventually become the definitive sound of the band, is dominated by punk influences. This is evident on the opening track “Next to You,” despite essentially being a love song. Andy Summers and Stewart Copeland initially felt the lyrics were neither aggressive nor political enough for their style at the time, but Sting was adamant about keeping the song as is. “Next to You” includes a slide guitar solo by Summers, which Copeland initially dismissed as “old wave.”

The second track is the reggae-influenced “So Lonely,” which was later released as the third and final single from the album. Sting has said he used Bob Marley’s “No Woman, No Cry” as the musical basis for the song, while the lyrics in its verses were recycled from his earlier Last Exit song, “Fool in Love.” The song itself, about someone who’s lonely after getting his heart broken, was seen as ironic by a large segment of the band’s listeners. Sting disagreed with this sentiment, saying, “No, there’s no irony whatsoever. From the outside it might look a bit strange, being surrounded by all this attention and yet experiencing the worst lonely feeling … but I do. And then suddenly the attention is withdrawn a half an hour later. You’re so isolated …” Although “So Lonely” failed to chart on its initial release, its subsequent reissue reached No. 6 on the UK Singles Chart in February 1980.

“Roxanne,” the album’s lead single, was written by Sting after visiting a red-light district near the band’s hotel in Paris, France. The Police had been staying there in October 1977 to perform at the nearby Nashville Club. The song’s title comes from the name of the character in the play Cyrano de Bergerac, an old poster of which was hanging in the hotel foyer. Sting had originally conceived the song as a bossa nova, although Stewart Copeland has been credited for suggesting its final rhythmic form as a tango. During recording, Sting accidentally sat down on a piano keyboard in the studio, resulting in the atonal chord and laughter preserved at the beginning of the track. The Police were initially reluctant about the song, but Miles Copeland was immediately enthusiastic after hearing it; he became their manager and got them their first record deal with A&M Records.,for whom “Roxanne” was their debut single. Although it failed to chart in the UK upon its original release, “Roxanne” also became the band’s first single in the United States and quickly charted on the Billboard Hot 100 in February 1979, peaking at No. 32 in April of the same year. It was also successful in Canada, where it peaked at No. 31. The song’s international success spurred a UK reissue of “Roxanne” in April 1979, this time reaching No. 12 on the UK Singles Chart.

The remaining two tracks on the first side of the album are “Hole in My Life,” another reggae-influenced song by Sting, and “Peanuts,” a composition written by Stewart Copeland and Sting about Rod Stewart. The lyrics were meant as an expression of disappointment on Sting’s part towards his former idol, of whom he said: “I used to be a great fan of his (Rod Stewart) but something happened to him. I hope I don’t end up like that.” Having since experienced the celebrity lifestyle himself, he no longer identifies with the song’s lyrical content and has come to view Stewart in a different light.

“Can’t Stand Losing You” begins side two of the original LP. Written and composed by Sting, the song is about a young lover being driven to suicide following a breakup. In a 1993 interview with The Independent, he described the lyrics as “juvenile,” saying that “teenage suicide … is always a bit of a joke”; he also claimed to have written the lyrics in only five minutes. “Can’t Stand Losing You” was released as the second single from the album, becoming the group’s first single to break the charts. It was banned by the BBC due to the cover depicting Stewart with a noose around his neck. The original 7″ vinyl reached No. 42 in late 1978,  but its June 1979 reissue nearly topped the UK Singles Charts, surpassed only by “I Don’t Like Mondays” by The Boomtown Rats. “Can’t Stand Losing You” briefly returned to the charts in 1980 as part of the Six Pack singles compilation set, which peaked at No. 17 on the UK charts in June 1980. In 1995, a live version of the song was released as a single and reached No. 27 in the charts.

The following track, “Truth Hits Everybody,” is a punk-influenced song. After that is “Born in the 50’s,” which details life as a teenager during the 1960s. “Be My Girl—Sally” is a medley of a half-finished song by Sting and an Andy Summers poem about a blowup doll. This leads into the semi-instrumental closer, “Masoko Tanga,” the only song on the album to not become a staple of the band’s live performances.

Two other songs from these sessions were excluded from Outlandos d’Amour but released as b-sides for two of its singles: “Dead-End Job,” a song credited to the entire band on the flip side of “Can’t Stand Losing You,” and “No Time This Time” by Sting on the back of “So Lonely.” The latter was subsequently included on Reggatta de Blanc.

Here is a link to the full article on wikipedia. ”

Best Police Songs Of The 80’s

As I said above The Police had 10 top forty singles in this decade. i have listed them below with the same format. Song name, year and position reached.

Police Albums In The 80’s 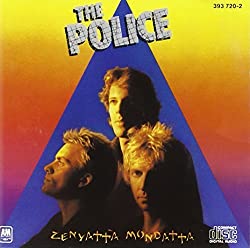 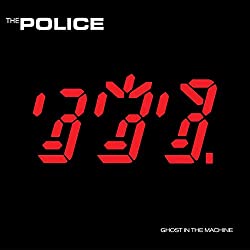 Ghost In The Machine 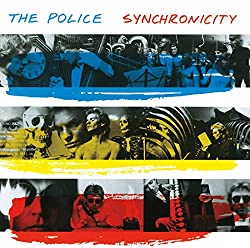 Sting born 2 October 1951, whose real name is  Gordon Matthew Thomas Sumner also had a fine solo career. Below I will list his solo career to date. He has had 11 top 20 singles and 8 albums.

I hope you agree this is a fair old list of the best Police songs. If I have brought back any good memories for you leave a comment below. I would be interested to hear what your favourite Police song was.