Welcome to this look at Marvin Gaye Songs, this guy had an amazing voice didn’t he? First a bit of info about Marvin, he was born on the 2nd April 1939 in Washington USA. When he was a young boy he sang and played organ in the church choir. At 16, he enlisted underage in the United States Airforce. This did not last long and he was discharged after arguments when he did not get drafted into the special air services as he had imagined but he found himself pumping fuel into aeroplanes instead.

On his return to Washington he began to sing with various local groups and recorded briefly for the Okeh label with the Marquees, before being invited to join the Moonglows a doo wop group under the direction of Harvey Fuqua. This was short-lived as Fuqua moved to Detroit with his wife Gwendoline Gordy. Marvin went too, marrying Gwendoline’s sister Anna.

He joined Berry Gordy’s Tamla label as a solo singer. At first, he was used as a session drummer playing on the early Miracles records and Stevie Wonder’s hit Fingertips in 1963. His first solo release on the Tamla label was “Let Your Conscience Be Your Guide” written and produced by Berry Gordy and released in the US in May 1961. Stubborn Kind Of Fellow and Hitch Hike featuring backing by The Vandellas gave him his first American hit in 1962 and 1963. Gaye was to co-write Dancing In The Street for the Vandellas who had a massive hit with the song. 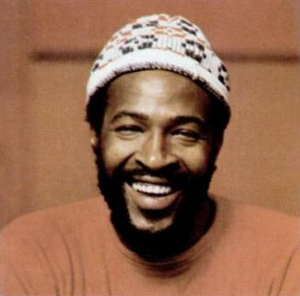 In the early Motown days Marvin Gaye was a member of the Motortown Revue who toured by bus and were mainly playing halls and record hops. Gaye and the rest of the Motortown Revue where working 7 days a week earning $200 which was well earned. When the revue played a theatre like the Apollo in Harlem they had to six or seven shows in one day. So their $200 was well earned.

Marvin Gaye’s charm and good looks brought a sizable female audience and led him to be paired with a number of the Motown labels girl singers. He first recorded with Mary Wells in 1964 then Kim Weston with whom he made It Takes Two which was a dance floor favourite in the UK. In later years he would join forces with Diana Ross. His partnership with Tammi Terrell was his most successful though, the partnership started in 1967 with Ain’t No Mountain High Enough written by young husband and wife team Ashford and Simpson. They also wrote and produced You’re All I Need To Get By and Ain’t Nothing Like The Real Thing.

Marvin’s partnership with Tammi Terrell lasted on and off for 3 years between 1967 to 1969. But the partnership was to end tragically when on stage Terrell collapsed into Gaye’s arms. After several operations in the coming months she finally died in 1970 from a brain tumour.

Not surprisingly Marvin Gaye was devastated and he stopped touring altogether and went into seclusion. It wasn’t until 1974 that he returned to the concert stage.

He went on to have a couple of hits with Diana Ross from the Diana and Marvin album. You Are Everything and Stop Look Listen (To Your Heart) reached number 5 and 25 respectively in the UK.

That is enough for now, below I have a Marvin Gaye songs list for you to look through at your leisure, is your favourite in the list? I will concentrate on his hits in the UK but if I have the info of the songs also being hits in the US I will add this too.

Here is a list of Marvin Gaye songs that made the top 40 in the UK. I will list the song title, the year released and position reached in the UK and if applicable the US.

As with the singles I will name the albums that made the UK and if applicable the US.

On April 1, 1984, the day before his 45th birthday, Marvin Gaye was shot dead by his father, Marvin Gay Sr. at their house in West Adams, Los Angeles, after an argument.

If you enjoyed this post on Marvin Gaye songs, could you pop over to my facebook page and click the like button please. You will then be able to see when I add my latest posts. Thanks in advance. Music Of The 70s facebook page.