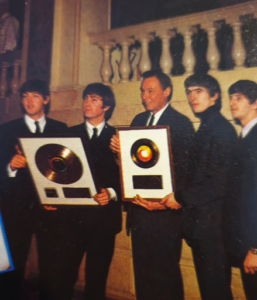 Today it is time for me to do the Beatles songs list. I have also done other posts for Paul McCartney and John Lennon.

I would imagine most people have heard of The Beatles. Four lads from Liverpool., John Lennon, Paul McCartney, George Harrison and Ringo Starr became one of the biggest groups off all time.

Formed in 1960 you can read the early history of The Beatles on the bottom of this post.

The Beatles songs list is going to be a good one that’s for sure. I will list the song, the year of release and chart position reached here in the UK and also the US if applicable.

They also had another 10 of their songs making a re-entry into the charts.

Let It Be was the last studio album as they split up not long after.

The Beatles were a band from Liverpool, in the UK who consisted of 4 members
there were the three original members, John Lennon, Paul McCartney
and George Harrison and after trying several drummers they invited
Ringo Starr to join them in 1962. The rest they say is history.

The band took the world by storm and the term Beatlemania was born. With
hordes of screaming girls following them all over the world. At
Beatles concerts the band could not be heard because of the screaming
of the girls in the audience, it was that loud.

As a schoolboy in 1956 John Lennon and Peter Shotton formed a skiffle
group called the Quarrymen, the name was taken from the school they
attended called Quarry Bank Grammar school. 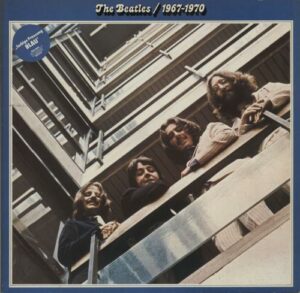 In 1957 Paul McCartney meets John Lennon and saw The Quarrymen play at a church
fete in Liverpool. Paul a proficient guitarist was soon invited to
join the band.

George Harrison a friend of Paul’s joins the Quarrymen, they move away from
their skiffle origins and start using the stage name Johnny and the
Moondogs.

In 1959 art student Stu Sutcliffe joins the group to play bass guitar. In August
the Casbah Club opens in Liverpool and The Quarrymen play there
regularly. They also meet Pete Best.

In November of that year the group disband but reform as the Silver Beatles consisting of John,
Paul, George and Stu Sutcliffe.

In August 1960 the re-named Beatles begin a residency at the Indra Club in
Hamburg, Germany with Pete Best as drummer. In December George
Harrison was deported and returned to Liverpool, followed by the
other Beatles as their work permits had run out.

On 21st March 1961 the Beatles make their first appearance at the Cavern
Club, The Beatles return to Hamburg in April to play at the Top Ten
Club. In June Stu Sutcliffe leaves the Beatles to go to art college
in Hamburg.

On 6th July the first edition of Mersey Beat magazine is released and John
Lennon writes an article on the formation of the Beatles in the first
issue.

On November 9th of that year Brian Epstein see the Beatles for the
first time at a lunchtime show at the Cavern. On December 3rd
Epstein goes to the Beatles with a management offer. On the 13th
they formally sign a contract with Epstein.

In January the Beatles audition for Decca Records in London, they perform 15
songs but are turned down by the company in March. On the 10th
April Stu Sutcliffe dies of a brain haemorrhage in Hamburg. The next
day the Beatles fly to Hamburg for a 7-week engagement at the new
Star Club.

Brian Epstein continues to try and interest London recording companies with
his Beatles tape. George Martin at EMI showed sufficient interest and
arranged an audition for the group.

On 6th June they perform 6 songs at the Abbey Road Studios. On the 11th
June the BBC broadcasts The Beatles In Concert from their studios in
Manchester.

In August the Beatles are signed as recording artists by EMI. On the 16th
of August Pete Best is sacked as drummer and replaced by Ringo Starr
former drummer with Rory Storm and the Hurricanes.

In October 1962 Epstein and the Beatles sign a new contract it is for 5 years
and Epstein is to receive 25% of the Beatles earnings.

Love Me Do is released in October on the Parlophone label. They make their first
television appearance doing the song on Granada TV in November. In
December Love Me Do peaks at number 17 in the UK charts.

On 1st January 1963 after a christmas engagement in Hamburg the Beatles open
a short tour of Scotland. Please Please Me is released on the 12th
January and reaches number 2. In February the Beatles are booked as
support for Helen Shapiro and they also release their first album
Please Please Me.

In April From Me To You enters the UK charts, in May the Beatles top the bill
in a British tour that includes Roy Orbison and Gerry and the
Pacemakers. On the 2nd May From Me To You tops the charts,
the first of 17 number 1 hits.

Without a doubt the Beatles were one of the greatest bands of all time and had massive success.throughout the 60’s and early 70’s. What are your memories of the group? Maybe you even saw them in concert. Let me know in the comments below.

5 Replies to “The Beatles Songs List – Singles And Albums”