Today’s post is the Donna Summer discography, all about Donna Summer of course. I am listening to Donna on you tube as I write this, Last Dance is on, a great song.

Donna Summer was born LaDonna Adrian Gaines in Boston, Massachusetts on the 31st December 1948. One of a family of seven she started singing publicly as a church choir soloist aged 10. She moved to New York as a young adult and got her first professional break when she was cast in the musical Hair, this entailed moving to Munich in Germany. She stayed in Europe between 1967 and 1974 working as a singer in shows such as Showboat, Porgy and Bess and Godspell. 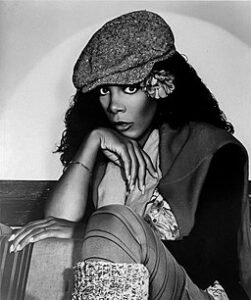 I will list the song name, the year it was in the chart in the UK and the US if applicable. I will also add the position reached in the chart.

Donna Summer sadly passed away on May 17th 2012 in Florida aged 63 from lung cancer.

Singers and music industry professionals around the world reacted to Summer’s death. Gloria Gaynor said she was “deeply saddened” and that Summer was “a fine lady and human being”. Liza Minnelli said, “She was a queen, The Queen Of Disco, and we will be dancing to her music forever.” She said that her “thoughts and prayers are with her family always.” Dolly Parton said, “Donna, like Whitney, was one of the greatest voices ever. I loved her records. She was the disco queen and will remain so. I knew her and found her to be one of the most likable and fun people ever. 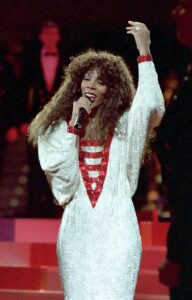 She will be missed and remembered.” Janet Jackson wrote that Summer “changed the world of music with her beautiful voice and incredible talent.” Barbra Streisand wrote, “I loved doing the duet with her. She had an amazing voice and was so talented. It’s so sad.” Quincy Jones wrote that Summer’s voice was “the heartbeat and soundtrack of a generation.” Aretha Franklin said, “It’s so shocking to hear about the passing of Donna Summer. In the 1970s, she reigned over the disco era and kept the disco jumping. Who will forget ‘Last Dance’? A fine performer and a very nice person.” Chaka Khan said, “Donna and I had a friendship for over 30 years. She is one of the few black women I could speak German with and she is one of the few friends I had in this business.” Gloria Estefan averred that “It’s the end of an era”, and posted a photo of herself with Summer. Mary J. Blige tweeted “RIP Donna Summer !!!!!!!! You were truly a game changer !!!” Lenny Kravitz wrote “Rest in peace Donna, You are a pioneer and you have paved the way for so many of us. You transcended race and genre. Respect. Lenny”.

Beyoncé penned a personal note: “Donna Summer made music that moved me both emotionally and physically to get up and dance. You could always hear the deep passion in her voice. She was so much more than the queen of disco she became known for, she was an honest and gifted singer with flawless vocal talent. I’ve always been a huge fan and was honored to sample one of her songs. She touched many generations and will be sadly missed. My love goes out to her family during this difficult time. Love, B” These paragraphs were taken from Wikipedia see full post here.

I hope you got what you were looking for with this Donna Summer songs post. Leave a comment below with your memories of Donna and your favourite song of hers.