Welcome to this 10cc songs list article. This post features a bit of history of the band and how they got together, as well as a list of their songs.

How They Got Together 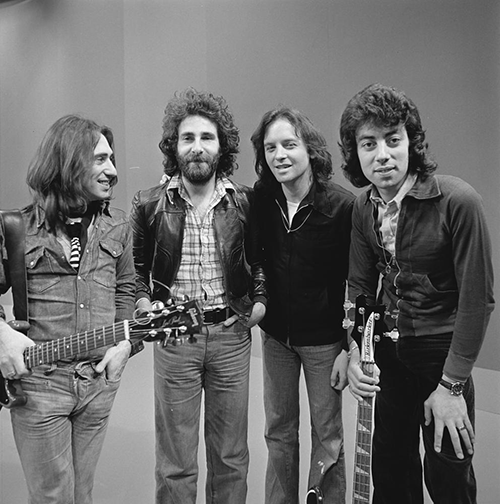 The group was formed in 1972, it was set up by four experienced Manchester musicians. Lol Creme (born on the 19th of September 1947) and Kevin Godley (born on the 7th of October 1945) were in a band called the Sabres and had also been at art school together. Eric Stewart (born on the 20th January 1945) and Graham Gouldman (born on the 10th May 1946) had worked with The Mindbenders.

Gouldman had previously been a successful writer with credits on many British hits in the sixties. These included the Yardbirds hits, For Your Love and Heart Full Of Soul. Look Through Any Window and Bus Stop with the Hollies. Herman’s Hermits, No Milk Today, Pamela Pamela with Wayne Fontana and Jeff Beck’s Tallyman.

When the Mindbenders split in1968 Gouldman went to work in America, Stewart meanwhile set up Strawberry studios in Stockport. He invited Godley and Creme to join him. Creme and Godley wrote a simple song called Neanderthal Man which the trio released as Hot Legs. It reached number 2 in the charts in the UK, this was followed by a tour with The Moody Blues. Halfway through the tour Gouldman returned from America and joined the band. An album they brought out flopped so they disbanded. 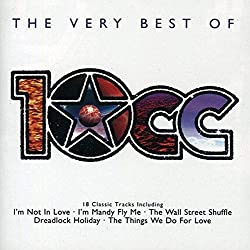 After they disbanded, all four returned to Strawberry Studios. They spent their time experimenting and doing session work. They helped Neil Sedaka with his comeback album Solitaire and also the follow up The Tra La Days in 1973. They also did some recording themselves and came up with a fifties style song called Donna. They took it to Jonathan King who suggested the band should call themselves 10cc.

They released the song late 1972 and the song soon rose to number 2 in the British charts. Their follow up single Johnny Don’t Do It flopped. They then had enormous success with their 3rd single Rubber Bullets which led to them concentrating on being a band.

The release of the album 10cc showed the writing talents within the band. To promote the album and to try to establish an image they had to perform live. This led to problems as transferring their studio craftsmanship to performing live proved near on impossible. To fatten the sound they added a 2nd drummer Paul Burgess also from Manchester. He worked with the band for the next 10 years.

Let’s have a look at their discography.

10cc had 11 top 30 singles in the 70’s. I will name the song first, followed by the year released and the chart position reached in the UK and if applicable the US.

As you can see they didn’t quite crack the US although they did have a couple of hits there.

They didn’t have great chart success with their albums. Three just about made it into the charts, Consequences reached number 52, L which reached No.47 and Ismism their biggest success reached No.29. They did have a greatest hits album that reached No.4 in the charts in 1987. This contained their own songs and 10cc songs. It was called Changing Faces: The Very Best Of 10cc and Godley and Creme.

10cc After Godley And Creme

Eric Stewart and Graham Gouldman recorded another 10cc album called Deceptive Bends in 1977 with the help of Paul Burgess. It seemed to make little difference that Godley and Creme left as the album reached number 3 and they had Things We Do For Love at No.6 in the singles chart too.

In 1977 the trio went on an international tour, the line up also included drummer Stuart Tosh, guitarist Rick Fenn and keyboard player Tony O’Malley. The tour was followed by the release of their first live album, Live And Let Live.

In 1978, they released the album Bloody Tourists which reached No3 in the charts. This album contained their reggae influenced hit Dreadlock Holiday which topped the charts in the UK.

I hope I brought back some memories for you with this 10cc songs list. Leave a comment if you have any particular memories of the band. Maybe you saw them in concert. Let me know below.