Today I turned on the radio and the first song to play was ELO’s Living Thing, so I thought I would do an ELO songs list. It is amazing how many songs they had in the charts, check it out below.

For those of you don’t know them, they were known as the Electric Light Orchestra but it was shortened to ELO. They are a band formed in Birmingham in the UK.

The impetus for forming ELO came from Roy Wood and Jeff Lynne when they had grown tired of churning out top twenty hits for the band they were in call The Move. They wanted to use the profits from that group to enter into something much more adventurous.

They wanted to blend guitars, cellos and violin in an effort to blend rock with classical music. At the beginning it was a bit of a disaster. It took from October 1970 when the band formed until the summer of 1972 to release the band’s first single. it was called 10538 Overture it was not well received by the critics but still made it to number 9 in the charts here in the UK.

They had a massive tour cancelled at great cost, simply because the band where not ready. They reluctantly made their first live appearance at Croydon’s Greyhound pub in April 1972.

Two members of the band, Move bassist Rick Price and violinist Steve Woolam, had already left in despair at the shambles. The concert was a disaster with Roy Wood stumbling about the stage in dark glasses and wig as if he couldn’t see any his instruments that he was playing so badly. 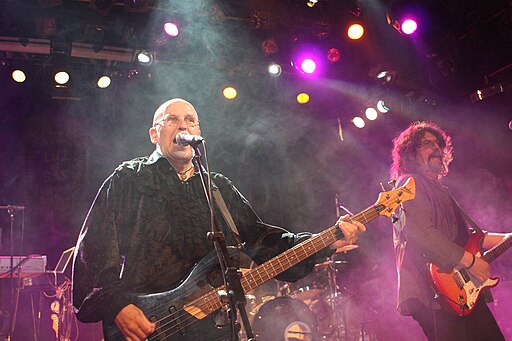 It was obvious that things had to change, but it still came as a surprise when Roy Wood left taking three of the band members with him. It was never really explained why he left but it was said that it wasn’t voluntarily. Only he would know why I suppose. Wood and the others formed Wizzard and were soon back in the charts.

The remnants of the band were obviously dispirited and would have probably split if it was not for their manager Don Arden who had a bit of a reputation as one of the toughest men in the rock world. He said the group were not very good anyway and the departure of Wood was a good thing. He argued that Jeff Lynne could now show he was the driving force behind the band.

His faith soon paid off and by early 1973 they were back in the charts at number 6 with Roll Over Beethoven. The new line up had played at the Reading Festival a few months earlier were, Jeff Lynne, Bev Bevan, Wilf Gibson, Richard Tandy(now playing keyboards), Mike Edwards and Colin Walker(cellos) and Michael D’Albuquerque(bass).

So, that was the beginnings of the band, let’s have a look at their discography.

I will list the song name, the year of release and the position reached in the UK charts and if applicable the US.

Who would have thought they would have had so many singles after the start they had. It shows persistence pays off. I can’t believe Strange Magic only reached no. 38 in the charts in the UK. Here is the video below.

I will do the usual, album name, year released and position reached in the charts in the UK and the US where applicable.

They also had a soundtrack album for Xanadu (with Olivia Newton John) that reached No. 2 in the charts in the UK and No.4 in the US. ELO also had 6 greatest hits albums that made the top 40, here they are below. 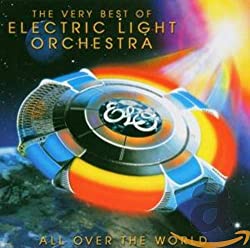 All Over The World: The Very Best Of The Electric Light Orchestra

Let’s have a look at the track list for their biggest selling album.

A lot of great songs there all in one place. I have listened to this album a few times over the years I can tell you. If you haven’t got the album already click the album cover to get the double album in vinyl.

I really enjoyed doing this post today, I woke up this morning with no clue what I was going to write about. As i said I turned on the radio and ELO where playing so I thought why not. I have always loved their music and even I was surprised how many songs they had actually produced. The radio station I listen to is Absolute Radio 70’s you can get it online, give it a listen they play some great songs.