I was sorry to hear that Steve Priest had passed away yesterday (4th June 2020). Steve as part of the band Sweet were massive in the 70s and a big part of the glam rock era. I remember first seeing him on top of the pops with Sweet doing Wig Wam Bam and the camera zooms in on Steve who sings ‘try a little touch, try a little too much’ in a very camp style dressed as a red indian in full headdress. See below. 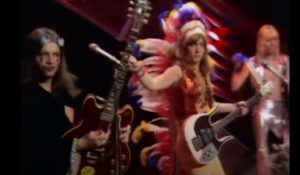 Stephen Norman Priest was born in Hayes Middlesex on 23rd February 1948. He played bass guitar as a teenager in local bands and in 1968 was invited to join a four piece band who were to become Sweet. The band were singer Brian Connolly, Drummer Mick Tucker and guitarist Frank Torpey. Torpey was replaced by Mick Stewart in 1969. Andy Scott joined the band in 1970 after Stewart left and we then had the line up of Sweet we all grew up with.

The band first entered the charts in March 1971 with a song called Funny Funny which reached number 13 in the UK charts. They followed this up with Co-Co in June of the same year reaching number 2. They had a minor hit with Alexander Graham Bell with peaked at number 33 in October 1971.

In 1972, they also had 3 hits starting with Poppa Joe in February which reached number 11 in the charts, Little Willy hit the charts in June 1972 and made it to number 4. This was followed in September by the song I mentioned earlier Wig Wam Bam which also reached number 4.

Sweet had their only number 1 in January of 1973 with Blockbuster which stayed top for 5 weeks. They followed this up with Hell Raiser which just missed out on the top spot in May of that year and another near miss when Ballroom Blitz also only made it to 2nd spot in September.

They hit number 2 again in January 1974 with Teenage Rampage, followed by The Six Teens in July which got to number 9. Their final song of the year Turn It Down did not make the top 40 reaching 41 in November 1974.

In January of 1976 Lies In Your Eyes got to number 35 and their final hit of the 70s was Love Is Like Oxygen which reached number 9 January 1978.

After Brian Connolly left in 1979 Steve Priest took over as lead singer of the band. This continued until 1982 when the original Sweet disbanded.

In 1994, Steve published his autobiography, Are You Ready Steve?, the title of which is taken from the intro to the Sweet’s “The Ballroom Blitz” when Brian Connolly counts in the song with, “Are you ready Steve? …Andy? …Mick? …Alright fellas, let’s gooooo!”

Steve is survived by his wife, Maureen, three daughters, Lisa, Danielle and Maggie, and three grandchildren, Jordan, Jade and Hazel.

RIP Steve Priest. Leave a comment below if you enjoyed the music and antics of this star of the 70s.