Welcome to this post featuring Gilbert O’Sullivan Songs. I will give a bit of history of Gilbert then add a list of his singles and albums.

Gilbert O’Sullivan was born Raymond Edward O’Sullivan in 1946 in Ireland. His moved to Swindon in England when he was 7 years old. When he was older he attended Swindon art college studying graphic design.

There was something else Raymond loved and that was music. He joined some local bands as a drummer/vocalist. That is when he started writing his own songs. It is said his writing influence were The Beatles as writers and Bob Dylan as a performer.

He released a couple of songs as Gilbert and as we all remember he had a distinctive style, with the flat cap and weird haircut. These singles made no impact but he did not give up. He decided to send a demo tape to the manager of Tom Jones and Engelbert Humperdink, whose name was Gordon Mills. He became his manager after being impressed with his song writing. The resulting first single Nothing Rhymed got to number 8 in 1970.

I will name the song, the year released and position reached in the UK and if applicable the US.

Gilbert has had 7 top 20 albums to date. Yes he is still releasing albums!

I will name the album, the year released, chart position reached in the UK and where applicable the US

Yes, number 6 was the correct spelling of the album, I have it in my collection.

The Berry Vest Of Gilbert O’Sullivan

Let’s have a look at Gilbert’s greatest hits album with the strange play of words in the title. Here is the track listing of the album. 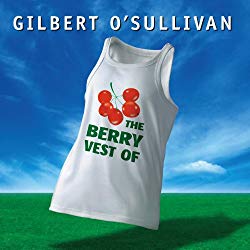 Gilbert is still performing and recording to this day, his last album which was self titled reached No.20 in the UK charts. He is touring at the moment and is coming to a place near me in October. I may take the wife for a night out, it should be good.