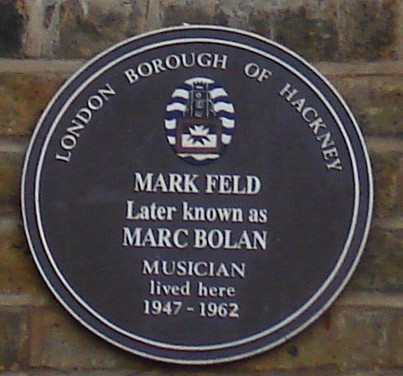 Anyone who is into 70’s music must have heard a few T.Rex songs in their time, so I have created A T.Rex songs list for you today.

The band were formed in 1967 by Marc Bolan and were originally called Tyrannosaurus Rex A bit of a mouthful no wonder they shortened it In 1970. They had released 4 albums since forming but changed their sound from acoustic to a more electric sound. The rest they say is history.

When they were at the height of their fame Marc Bolan and Micky Finn were the poster boys, it was those two that were in all the magazines and newspapers. Further on in this post I have listed other musicians involved with the band.

The list below will consist of the song, the year released and chart position reached in the UK. Enjoy.

Electric Warrior was by far T.Rex’s most successful album. It was the top selling album in the UK in 1971.

This is what wikipedia had to say about the album.

Electric Warrior was released on 24 September 1971 by record label Fly in the UK and Reprise in the US. Electric Warrior reached number 32 in the US Billboard 200 chart and went to number 1 on the UK Albums Chart, staying their for several weeks and becoming the best-selling album in the UK in 1971. It was preceded by the single “Hot Love”, a million-selling single in the UK, where it stayed at number 1 for six weeks.

Two singles were released from the album: “Get It On” and “Jeepster”. “Get It On” was T. Rex’s biggest selling single, and became the band’s only top-ten US hit. In the United States, “Get It On”‘s title was originally changed to “Bang a Gong (Get It On)” to distinguish it from Chase’s song “Get It On”, which was also released in late 1971. The printing of the song title “Bang a Gong (Get It On)” on the back cover of original Reprise Records North American pressings of Electric Warrior is in a different typeface from the surrounding text, with the song’s original title retained on the lyric sheet. 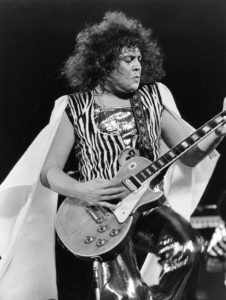 The cover artwork was designed by British art design group Hipgnosis, based on a photo taken by Kieron “Spud” Murphy at a T. Rex concert at the Albert Hall, Nottingham on 14 May 1971. Murphy also took the photo of the band that was used for the poster that was included with the first issue in the UK and Germany. The inner sleeve artwork, portraits of Marc Bolan and Mickey Finn, was drawn by artist George Underwood.

In 1987, Electric Warrior was ranked number 100 in Rolling Stone magazine’s “100 Greatest Albums of the Last 20 Years” list. In 2003, the album was ranked number 160 by the same magazine in its list of the 500 greatest albums of all time. In 2004, Pitchfork ranked Electric Warrior as the 20th best album of the 1970s. The album was also included in the book 1001 Albums You Must Hear Before You Die.

The song “Jeepster” is featured in a bar scene in Quentin Tarantino’s Death Proof (2007). In the opening scene of the film Billy Elliot (2000), the title character is shown putting Electric Warrior on a turntable and skipping to the song “Cosmic Dancer”. “Cosmic Dancer” was also included in the soundtrack for the film Velvet Goldmine (1998).

Bolan, in a 1971 interview contained on the Rhino Records reissue, said of the album “I think Electric Warrior, for me, is the first album which is a statement of 1971 for us in England. I mean that’s… If anyone ever wanted to know why we were big in the other part of the world, that album says it, for me.”

Bolan was a guest on the BBC Television show, Cilla, in January 1973. He and Cilla Black sang an acoustic version of “Life’s a Gas”.

Here is a link to the full article on wikipedia. 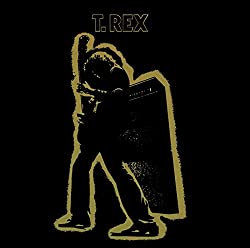 Past Members Of T.Rex

As listed in wikipedia

I hope you liked this post on T.Rex and it brought back good memories for you. I remember buying my copy of Electric Warrior and playing it over and over. They were a big part of the glam rock scene in the UK in the 70’s.

Leave a comment below and let me know your memories of T.Rex, maybe you were lucky enough to have seen them live.