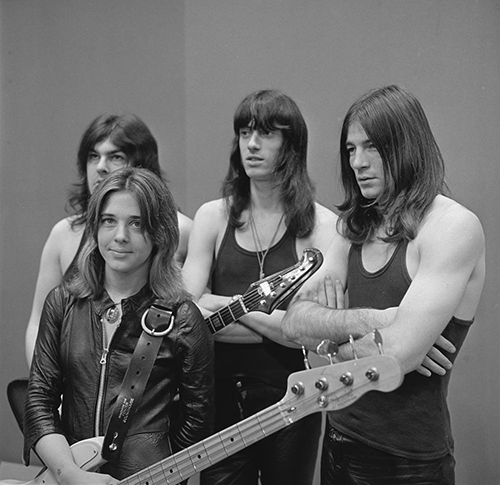 Today we take a look at Suzi Quatro songs. I will add a bit of history of Suzi and then I will list her singles and albums.

Suzi Quatro was a welcome change from the other female artists in the 70’s, the others were kind of folksy and sugar sweet. Along came Suzi with her rock style, playing the guitar, the leather jumpsuits. The music public loved her in the UK where she had her biggest success.

Susan Kay Quatro (born on the 3rd June 1950) in Detroit, is an American singer/songwriter and actress. Suzi was the first female bass player to become a rock star.

Suzi started her music career in the mid sixties, with an all girl band called The Pleasure Seekers with her sister Patti and two friends.

In May 1964, a new club opened in Detroit called The Hideout. The club was run by Dave Leone and Ed “punch” Andrews and became the centre of Detroit’s garage beat group scene.

Soon after they were they formed The Pleasure Seekers were playing regularly at the Hideout. They were playing basic favourites like “Louie Louie”, “Little Latin Lupe Lu”, “Playboy” and other tunes that shared the same three-chord sequence.

The Hideout proved such a success that in 1965, Dave Leone formed a record label, Hideout Records. The record label was to promote local talent and The Pleasure Seekers were one of the artists to record there.

The Pleasure Seekers released their first single called Never Thought You’d Leave Me/What A Way To Die in 1966. They also featured on an album in 1967 called Best Of The Hideouts along with other Detroit celebrities The Underdogs, The Yorkshires and The Henchmen.

The novelty of an all girl group got them work elsewhere, as it spelled pulling power to club owners. They played 5 sets a night in sleazy New York clubs, and they also entertained the injured US troops in Vietnam .

They were signed by Mercury but had one flop single called Good Kind Of Love/Light Of Love. They had become nothing more than a cabaret band playing top 40 music, dressed in mini skirts and thigh length boots, but they were making a healthy wage.

In 1968, they returned to Detroit to play at a festival promoted by Suzi’s brother Michael, but in Suzi’s words they died a death The Quatros were convinced their future lay in progressive rock. They brought in younger sister Nancy on vocals and changed the bands name to Cradle. They dropped their pop and soul numbers for Jimi Hendrix and Cream songs.

Cradle scraped a living in Detroit for the next two years. Then, in 1971 Mickie Most was in Detroit with Jeff Beck and went to see Cradle. He wasn’t impressed with them but the bass player caught his eye and he asked her to come to England, alone, to record.

The family ties of Cradle caused Suzi to refuse his offer. When the band split in October 1971, she checked if Most was still interested in her talents, she then caught a plane to London.

Despite Most’s reputation as a pop-music magician, success was not immediate. The first single written by Suzi, Errol Brown and Phil Denny called Rolling Stone was a flop. In November 1972 she had recruited a new band, guitarist Len Tuckey (soon to be Suzi’s husband), Alastair McKenzie (keyboards) and Keith Hodge on drums.

They set out on a UK tour supporting Slade, I actually saw her on this tour as I was a big Slade fan and went to see them in Edinburgh. By the end of the tour, the band had become a good little band doing Suzi’s original numbers and old rock and roll songs.

The band were still weak though and Mickie Most called in Nicky Chinn and Mike Chapman who were well-known hit makers in the 70’s. The result was, that in May 1973, the brash sound of Can The Can hit the charts.

Suzi Quatro dressed in her well remembered tight leather jump suit and the band appeared on Top Of The Pops. The song soon hit the top of the charts, this was followed by similar sounding hits, 48 Crash, Daytona Demon, Devil Gate Drive, Too Big and Wild One.

By 1976, the glam rock boom was fading fast. The image that Suzi had created for herself helped her enter an acting career. From 1977 she appeared regularly in Happy Days as would be rock star Leather Tuscadero.

She continued to get the odd hit record and played live but the Glam Rock era was over.

Suzi Quatro had 11 top 40 singles in the UK but did not do so well in her home country the US. I will list the song title, the year released and position reached in the UK and if applicable the US.

I have searched everywhere I can and can’t find the chart positions for Suzi’s studio albums. I will list the albums and year released though. 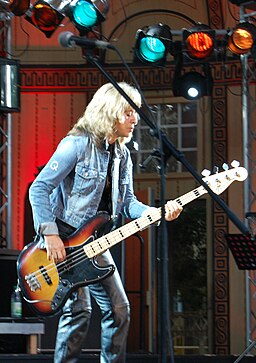 Suzi Quatro also had a few compilation albums out too. 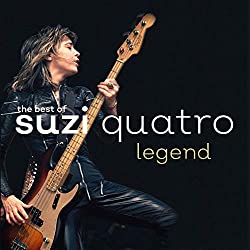 Suzi Quatro was very successful in the UK during the 70’s, did you ever get to see her live?  What is your particular favourite?  Let me know by leaving a comment below. It will be great to hear of your memories of Suzi.