Today I decided to do a Stevie Wonder songs list. It is amazing the amount of songs he has released and a lot of them were massive hits all over the world. Leave a comment at the bottom of this post if you are a Stevie Wonder fan and let me know which song is your favourite. Though that will be hard to choose just one, I heard He’s Misstra Know It All on the radio the other day and thought I haven’t heard this for years, why don’t they play more Stevie Wonder songs on the radio?

Steveland Morris was born on 13 May 1950 in Michigan USA. At the hospital in Michigan too much oxygen was pumped into two incubators, one girl died but Steveland survived but was left blind. His mother Lula Hardaway had already had two healthy children Milton and Calvin. Stevie s father could cope with the burden of bringing up a blind child and left the family.

When he was four Stevie’s family moved to Detroit in search of a better life. They settled though in Breckenridge one of the worst slums were everybody worked for the Ford motor company and the kids were always in trouble.

Buying Christmas presents was easy as he was always banging pots and pans so drums were a good present. This was usually smashed to bits by Boxing Day though. A friendly barber gave him a four holed harmonica on a chain. They had now moved to the west side of Detroit and a neighbour who was leaving the area left him a piano and the local Lions club gave him a decent set of drums one Christmas. This obviously helped with his musical development. 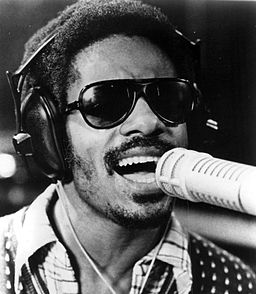 Word of Stevie’s talent soon spread and Ron White a member of Motown’s The Miracles heard about the little blind bot from his brother. Ron went to hear him play and was impressed by the multi-talented 11 year old. White arranged to take him to Motown’s studios the next day to meet Brian Holland. Later after Berry Gordy had heard Stevie play the company offered him a contract.

Stevie’s friendliness and unspoilt nature though did not convert into healthy record sales. Songs like I Call It Pretty Music ( With Marvin Gaye on drums), a duet with Clarence Paul called Waterboy Contract On Love all failed to sell in quantity. They needed a new image for Stevie, along the line somewhere Steveland Morris had become Little Stevie Wonder the fact he was not yet a teenager accounted for the little part. The staff at Motown had taken to calling Stevie the boy wonder. So that is how he ended up as Stevie Wonder. Let’s have a look at Stevie Wonder songs.

I will list the name of the song, the year the song was in the charts and the position it reached in the UK and were applicable the US. I will only list songs that made the top 50.

Stevie Wonder has won 22 Grammy Awards. He was the first Motown artist and second African-American musician to win an Academy Award for Best Original Song, for the 1984 film The Woman in Red. Wonder has been inducted into the Rhythm and Blues Music Hall of Fame, Rock and Roll Hall of Fame and Songwriters Hall of Fame, and has received a star on the Hollywood Walk of Fame. He is also noted for his work as an activist for political causes, including his 1980 campaign to make Martin Luther King Jr.’s birthday a federal holiday in the United States. In 2009, he was named a United Nations Messenger of Peace. In 2014, he was honored with the Presidential Medal of Freedom. In 2021, he was named as a founding inductee of the Black Music and Entertainment Walk of Fame. This paragraph was taken from Wikipedia see full article. 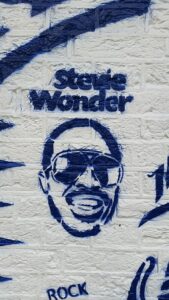