Following on from my previous post on the groups that created the music of the 70s I would like to start at G and see where it takes me.

Genesis had 3 top 40 hits in the 70s here in the UK. Follow You Follow Me was their highest chart entry at number 7.

Geordie had 4 hits during 1972 and 1973 with All Because Of You being their biggest hit at number 6.

The Glitter Band had 7 top 20 hits in the 70s with Goodbye My Love reaching number 2.

Golden Earring had a one hit wonder with Radar Love which reached number 7. 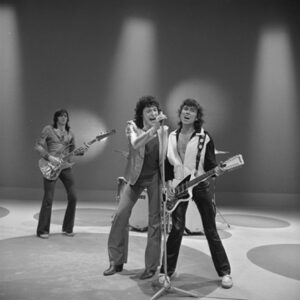 Greyhound had 3 top 20 hits with Black Is Black being their highest chart placing at 6.

Hawkwind had their biggest hit with Silver Machine which I remember buying at the time. It reached number 3 in the charts, they had another minor hit with a song called Urban Guerrilla, no I haven’t heard of it either.

Heatwave made the charts 5 times with Boogie Night being their biggest hit at 2 in 1977.

Hello had 2 top 10 hits with Tell Him which reached number 6 and New York Groove which made it to 9.

The Hollies made the top 40 seven times in the 70s with The Air That I Breathe being their biggest hit at 2. I have been hearing one of their songs a lot lately on absolute 70s here in the UK. It was called Gasoline Alley Bred and I don’t remember from back then but it is a good 70s songs watch the video below.

Jimmy James and the Vagabonds had two hits, I’ll Go Where The Music Takes Me got to number 23 in 1976 and Now Is The Time reached number 5 in the same year.

Johnny Johnson and the Bandwagon had 2 hits in 1970, Sweet Inspiration reached number 10 and Blame It On The Pony Express got to number 7.

The Knack were a one hit wonder with My Sharona in 1979 and it reached number 6.

Gladys Knight and the Pips had 15 top 40 hits in the 70s. The Way We Were and Baby don’t Change Your Mind both reached number 4.

Kraftwerk had one hit with Autobahn in 1975 and it made it to number 11.

Kursaal Flyers  Another one hit wonder Little Does She Know which peaked at number 14 in 1976.

Limmie + The Family Cookin’ had 3 hits with You Can Do Magic being their biggest hit at number 3 in 1973.

Lindisfarne had 4 top 40 hits with Lady Eleanor being their biggest chart success at number 3 in 1972.

Liverpool Express  Had three top 40 hits with You Are My Love in 1976 reaching number 11.

Love Unlimited had two top 20 hits. Walking In The Rain With The One I Love in 1972 and it reached number 14 and they followed that with It May Be Winter Outside (But In My Heart It’s Spring) in 1975 which got to number 11.

Paul McCartney And Wings had a string of hits in the 70s, 21 in fact with Mull Of Kintyre/Girl’s School being the only number one.

McGuiness Flint had a couple of top 5 hits with When I’m Dead And Gone and Malt And Barley Blues which reached number 2 and number 5 respectively.

Madness appeared on the scene in 1979 and had a couple of hits with The Prince which reached number 16 and One Step Beyond which peaked at number 7.

Manfred Mann had 3 top 10 hits with Joybringer which got to number 9 in 1973. They then had a hit with Blinded By The Light a Bruce Springsteen song, did you know that? This was in 1976 and got to number 6. Their final hit of the 70s was Davy’s On The Road Again in 1978 and it reached number 6.

Manhattan Transfer had 6 top 40 songs with Chanson D’amour going to number one.

Manhattans had two big hits with Kiss And Say Goodbye and Hurt which both reached number 4 both in 1976.

Bob Marley and the Wailers had 6 top 30 hits between 1975 and 1979 with Jamming/Punky Reggae Party and Is This Love both getting to number 9.

Marmalade also had 6 hits in the 70s. Rainbow in 1970 was their highest chart appearance at number 3. 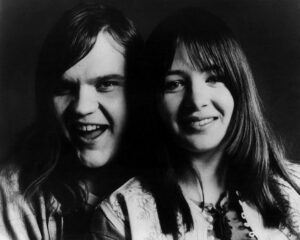 Medicine Head had 4 top 30 hits but people usually just remember their hit One And One Is One which reached number 3 in 1973.

Members had 2 hits but their best chart success was The Sound Of The Suburbs in 1979 and it reached number 12.

Middle Of The Road had 5 hits which included Chirpy Chirpy Cheep Cheep at number 1 in 1971 and Tweedle Dee Tweedle Dum at number 2 the same year.

Mink De Ville had a one hit wonder in 1977 with Spanish Stroll which reached 1977.

Mr. Big had two hits in 1977 with Romeo that reached number 4 and Feel Like Calling Home which only got to 35.

Mixtures were yet another one hit wonder with The Pushbike Song that got to number 2 in 1971.

Motors had 2 top 20 hits with Airport being their most successful song in 1978 reaching number 4.

Mott The Hoople had 6 top 40 songs. The classic song All The Young Dudes written by David Bowie was their biggest hit reaching number 3 in 1972.

Move Had four songs in the top 40 with with California Man hitting number 7 in 1972.

Mungo Jerry also did well with 8 hits in the 70’s including 2 number ones. In The Summertime and Baby Jump.