Today I am going to write about Status Quo and more importantly Status Quo songs in the 1970s and 1980s when they were at their peak. They of course went on to have further chart success, I will list them also. But first a bit of history of the band.

Status Quo started life in 1962 as The Spectres an instrumental combo formed by two pupils at Sedgehill Comprehensive School in Beckenham, South London. Francis Dominic Michael Nicholas Rossi ( born Peckham on the 29th May 1949) (guitar) and Alan Lancaster (born Peckham on the 7th February 1949) (bass) formed a friendship while playing in the brass section of the school orchestra. They decided to form an electric group together as they both loved rock and roll. They roped in a school friend Jess Jaworski on organ.

They started playing crude versions of the Shadows, Johnny and the Hurricanes and Tornadoes numbers. The Spectres made their first appearance in the autumn of 1962 at the Samuel Jones Sports Club, Dulwich. They added drummer John Coghlan (born on the 19th September 1946) the following year and started doing gigs at local youth and working mens clubs in South London.

They dropped instrumentals for a more Beatles Pacemakers orientated music. In 1965 with a summer season at butlins Minehead lined up they decide to go professional. Jaworski wanted to stay on at school so left the band and Roy Lynes was brought in his place. After this stint they returned to South London and under the guidance of their manager gas-fitter Pat Barlow they recorded a demo tape. They released a few songs but never got anywhere and in the spring of 1967 they decided to adopt a ne style and image, they changed their name to Traffic Jam but the name lasted just one flop single ‘Almost But Not Quite There’ they then decided to change their name to Status Quo.

A song written by Francis Rossi Pictures Of Matchstick Men was released in early 1968. The song quickly picked up airplay on pirate radio stations and began to climb the charts. Later in 1968 the group added a second guitarist/singer, Rick Parfitt (born Woking, Surrey on the 12th October 1948). Within weeks of him joining the song Pictures Of Matchstick Men was in the top ten peaking at number 7 and they were appearing on Top Of The Pops wearing Carnaby Street paisley shirts and lacquered hairdos. Suddenly they were teen idols but this flower power fad was short-lived. They did have another top ten hit with a song written by Marty Wilde and Ronnie Scott called Ice In The Sun which reached number 8.

Their producer John Schroeder tried to turn them into a bee gees type band with Rossi and Parfitt doing harmonies and as Rossi said ‘we were treated like morons and it was a disaster’. Morale slumped and Roy Lynes gave up. His departure was a blessing in disguise as without the organ which dominated their material they had to restructure their musical policy. Shaping it around 2 guitars Rossi and Parfitt confessed their limited abilities they just turned up the treble and the volume and set up a rhythm assault. Gone were the Carnaby Street clothes and replaced by jeans and trainers.

The Status Quo we know and love were now ready to hammer the charts with their new sound. As Francis Rossi said ‘ we like 12 bars and we’re not ashamed of it’ and he once remarked ‘nobody hits a 12 bar like we do’.

Let’s move onto the 70s and have a look at their success.

Status Quo had 16 top 40 singles in the 70s and 10 top 40 albums. I will name the song the year released and position reached in the UK

Status Quo Songs In The 80s

Status Quo – The 90s and Beyond 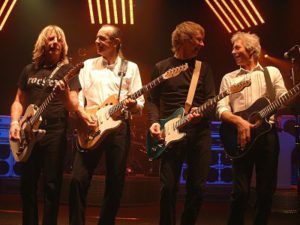 On 28 October 2016, Rick Parfitt permanently retired from live performances after suffering a heart attack earlier the same year. On 24 December, he died in hospital in Marbella, Spain as a result of severe infection, after suffering an injury to his shoulder. Parfitt’s funeral was held at Woking Crematorium on 19 January 2017 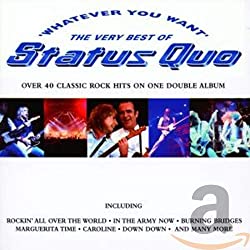 If you enjoyed this post on Status Quo songs, connect with me and the other members over on my facebook group.